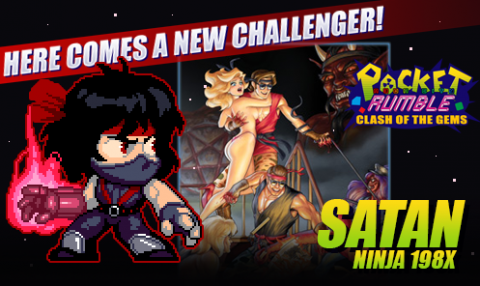 Whoa! Check out that radical sprite art of Satan Ninja Eddie, done by Rudy Wilde. Awesome right? Now you're probably wondering what the hell this Pocket Neon City RUMBLE is.

It's a card battle game inspired by oldschool beat 'em up video games from the '80s and '90s. You know, games like Double Dragon, Streets of Rage, Final Fight, etc. Two-to-six players duke it out using cards that represent mutant martial arts fighters... and now Eddie McCarthy as well.

This card game is actually the second in the series. The original, N3ON City Rumble, was funded on Kickstarter back in 2014. This new version of the game is "lighter," meaning simpler rules for faster play, and it features chibi-style (pocket-sized) characters. But most importantly, it features Satan Ninja Eddie, which makes it way superior to the first card game. Or any card game, really.

A little while ago, I was approached by Neon City Rumble mastermind Davy Wagnarok, who had discovered Satan Ninja 198X and, recognizing how radical it is, thought it'd be awesome to feature Eddie as a bonus character in the card game. I've never played this sort of battle card game in my life (not even Magic: The Gathering), but Jessica and I loved the aesthetics and how professional it all seemed, and were happy to hand Eddie off to go play in another world. Now I'm mega-pumped to break my battle card game cherry.

The game has already doubled its original funding goal, and they've successfully delivered a Kickstarted game in the past, so it seems like a safe bet. If you're into card games, oldschool brawlers, or even if you just want to collect everything Satan Ninja related, you should totally go back the Kickstarter before it ends.

This has been a super busy week for us, with some really cool Satan Ninja things happening that aren't quite ready to be announced yet. On the down side, Jessica's been too busy to have a page ready for this week.

BUT, you can instead feast your eyes on our first ever interview about the comic, which has just gone live over at Pipedream Comics. It's a pretty intensive interview with Jessica and me, so even the mega-fans among you will learn a thing or two. 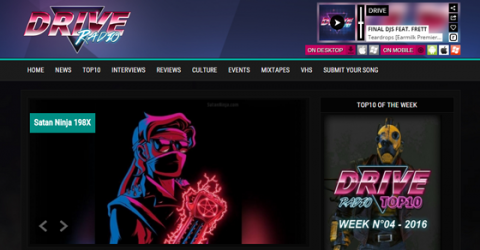 Reading a comic like ours at the pace of one page a week can make it hard to remember everything that's been introduced within the comic so far. So to help you out with that, we've decided to add a Glossary page to this website in addition to the Characters page. The Glossary page even contains some tidbits that haven't yet been fully made clear in the comic. We'll continue to update it as the comic goes along.

Even though this comic seems, at a glance, to just be '80s-inspired silliness, we've actually spent a lot of time working out all the details and lore of the Satan Ninja 198X universe, resulting in a massive internal reference document that we refer to as the Satan Ninja Bible. The other day, I was talking to our weblord Ghoul about the possibility of implementing a wiki section to our site. It's too early for something like that now, but if the fan base ever gets big enough and are interested in something like that, we'll probably implement it.

Also, we've just been featured on Drive Radio's website. It's a website that mostly serves as a webradio that plays modern '80s-inspired synth bands (like the ones you'll find over on our sidebar under "Unofficial Soundtrack"), but they also have reviews and feature other rad things (like our comic), so check it out. We were especially amused by the final line of their Satan Ninja write-up.

So the extremely wise dudes over at Pipedream Comics have declared Satan Ninja 198X one of the top 10 indie digital comics and webcomics of 2015. How fuckin' rad is that?

The latest page of this award-winning comic (we can call ourselves that now, right?) is going to go up later than usual. But it's a super awesome page, so it'll totally be worth it. 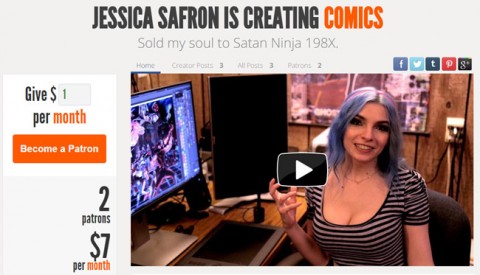 If you look at the top of the site, you'll see we have a couple new menu options. We now have an "Extras" section which will be home to Satan Ninja videos (like the awesome promo videos we did recently), fan art, and whatever else we feel like tossing up there in the future.

More importantly, we now have a link to my Patreon page. If you have no idea what Patreon is, it's a site for creators (like me) to gather monetary support from patrons (hopefully like you). In exchange for supporting me with a monthly pledge (of whatever amount you want), I'll give you special perks and rewards. The more you pledge, the cooler the rewards.

I've quit my security job to focus entirely on making art, with Satan Ninja 198X being my top priority. It's pretty terrifying to not have steady income, so I'm really hoping that I'll eventually gain enough support through Patreon to put my mind at ease. That way I can stop worrying and simply focus on drawing awesome stuff.

So please check out my Patreon page. I explain it more thoroughly there, AND you can watch a new video we put together for it. Thanks!

Our super-awesome mock '80s commercials for Satan Ninja 198X have been chopped up into separate videos, so if you haven't seen them yet (or you want to watch 'em again, and who could blame you), you can check 'em out here:

Ever wish you could wear a Satan Ninja 198X t-shirt? Well, you can't (yet), but you can wear a shirt featuring some of Jessica's badass art. Check out this shirt she recently designed for Maddox: 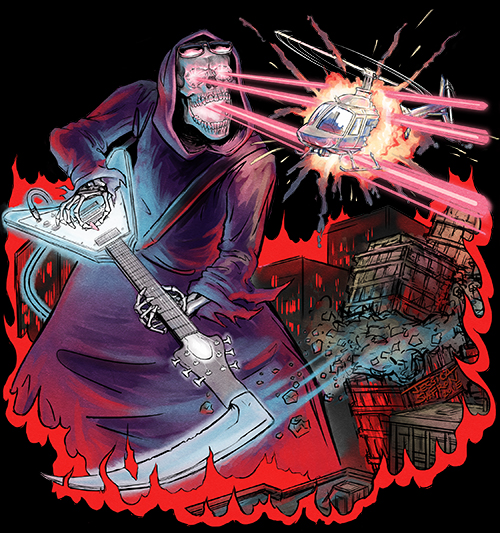 You can purchase the shirt in a whole bunch of colors (in standard men's style, or in women's V-neck) through his online store.

Also, Jessica and I got a cool surprise this week when we learned that Satan Ninja 198X was featured on the latest episode of The Awesome Comics Podcast. So go check it out to hear some British chaps talk a bit about our comic (if you're short on time, they start talking about us at the 0:22:29 mark, and it gets brought up again just after an hour into it). We've been approached by several different podcasts at conventions who said they wanted to interview us or feature our comic on their podcast, but none of them ever followed through, so it was awesome to finally get to hear strangers talk about us.

After a few sleepless days of editing, the live-action Satan Ninja 198X promo is finally done—and it's rad as hell! Check it out and see for yourself:

It's the closest you can get to seeing a live-action Satan Ninja 198X movie—for now.

There's no way this would have turned out nearly as kick-ass if it weren't for so many of our super-talented friends who helped us out with this. We're especially grateful to Mike Cook for the sweet lighting, the use of his studio, his filmmaking advice, his ultra-sweet tunes, and his amazing photography; Izabella VanRyn for doing an incredible job with the makeup; and Jay Barron of Evil Duck Workshop for making the Satan Ninja belt, and for turning a Power Glove into the most badass prop of all: the Shinobi Fist of Hellpower! Also thanks to Nightcrawler, BATTLEDAMAGE, and Greggory Samsa for lending some super bitchin' tunes.

My next blog post will go into some of the behind the scenes details of the promo and I'll share some more of the awesome set pictures Michael Cook took, like the one of the "Satan Ninja" below. But right now I'm completely exhausted and need to get some sleep.

One final thing: if you dig this video, please share it and help us spread the word about our radical comic. It'd really mean a lot to Jessica and me. 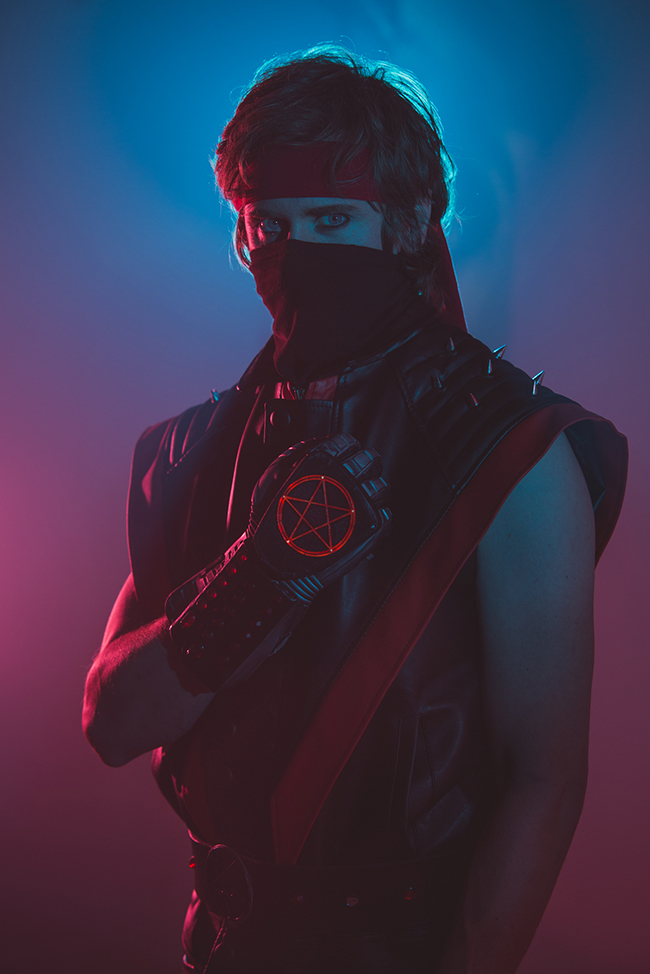 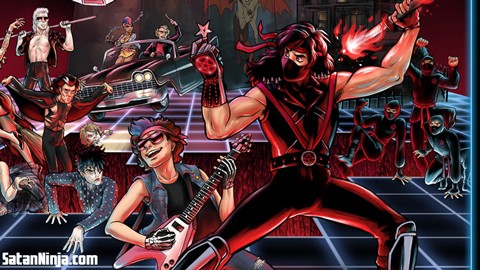 Also, our webdude Ghoul has updated the About The Character's page, so now they're all nicely organized instead of having every profile stacked in one big-ass list. Thanks, Ghoul!

As for our live action promo videos, I'm currently making the final edits to them. They'll be posted here as soon as they're ready. Definitly this week—possibly as soon as tomorrow. They're super awesome, and we can't wait for everyone to see them. Our previous update contained some preview images, so check it out if you missed it.

Sorry our hiatus lasted so much longer than we expected. We're back now, and we plan to keep chugging along with weekly updates for a long time to come. 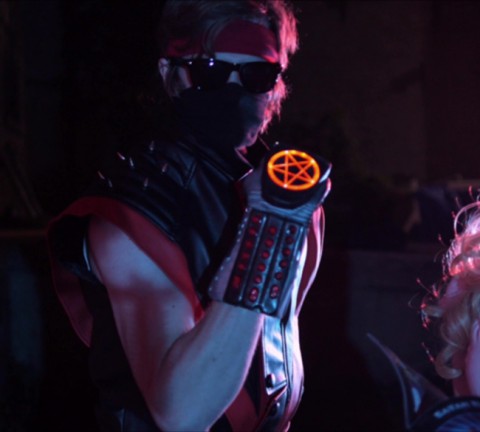 The image you see above is a screenshot taken from one of the secret projects we've been working on: a live action Satan Ninja 198X promo. We've been shooting it over the course of the last few weeks and just shot the final scenes for it earlier today. It'll be a series of cheesy '80s-inspired commercials for our comic starring Jessica and I (and some of our awesome friends) in various roles.

We figured this would be a way more interesting way to use our "advertising budget" than to do something more typical like take out add space or whatever. You'll be hearing more about (and watching!) the promo soon, but for now, here's a couple more screenshots: 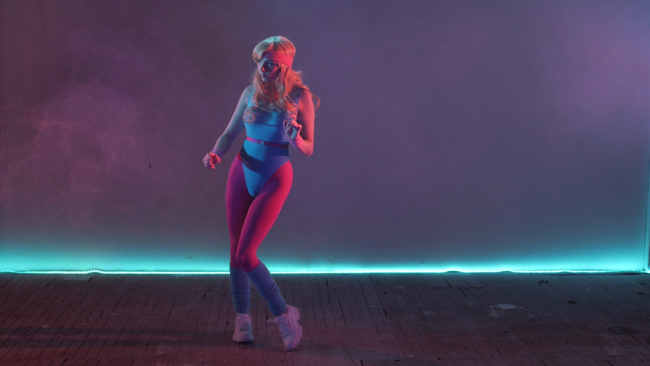 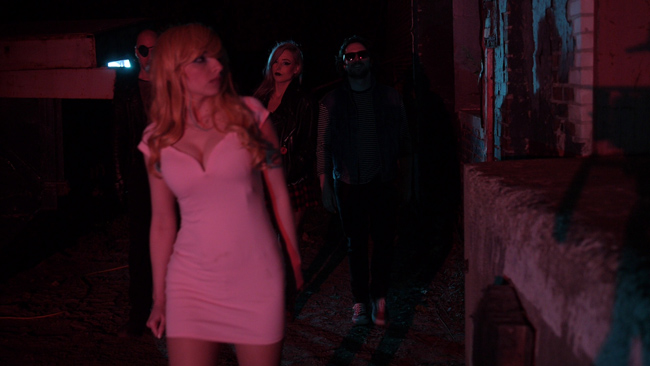 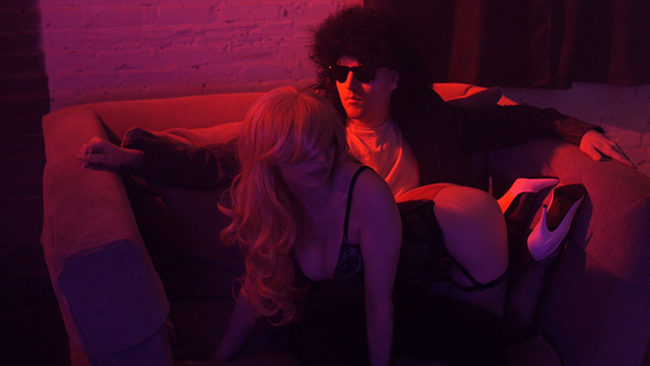 Things have gotten pretty quiet around here, we know. It's the calm before the storm.

My debut novel is coming out this next October, so Jessica's been editing it and whipping up illustrations for it. But don't worry, most of her time has been going toward working on the third issue of Satan Ninja 198X. She's mostly been focusing on the Issue 3 pages, which are looking awesome, but now she's shifted focus and has begun kicking ass on the cover. Here's a little preview: 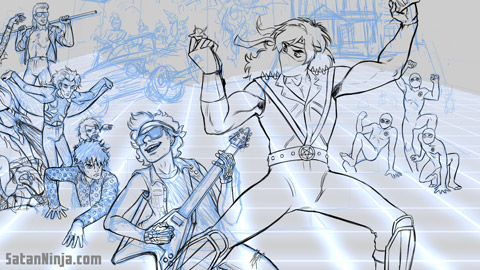 And then we have a couple secret Satan Ninja-related projects that we've been working on. It looks like the big one will finally be ready to be unleashed sometime in October, at which time we'll finally be coming off our hiatus.