Ninjas & Me: An Adam Dravian Retrospective 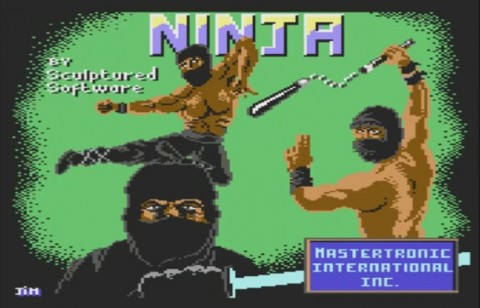 My Introduction to Ninjas

When I decided I’d write this, uh, essay blog-thing, I tried to remember what it was that first got me into ninjas. I distinctly remember my mom helping me to wrap my head up in a makeshift ninja mask so I could go around the back yard and perform incredible spin-kicks on invisible enemy ninjas. Here’s photo evidence: 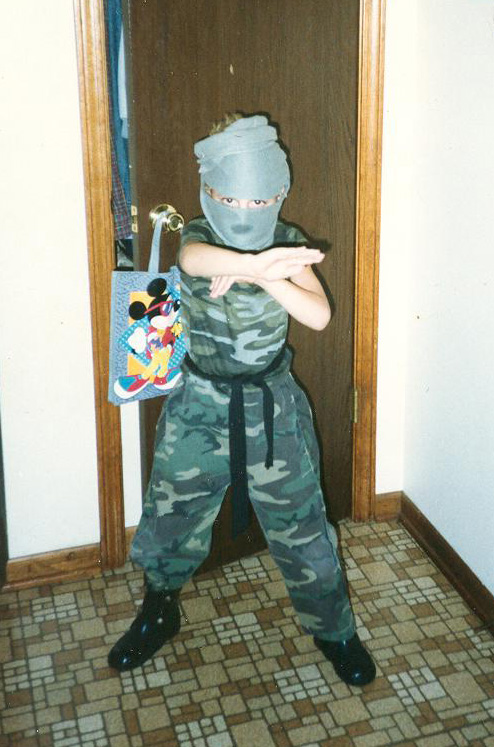 I believe that was in the summer of ‘87, which would make me 6 years old.

So I wondered what, exactly, made me a ninja fan. Despite growing up with HBO, I hadn’t seen any of the early-to-mid ‘80s ninja movies. I know I liked Snake Eyes from the G.I. Joe cartoon, but few episodes featured him prominently, so I don’t think that was the main source of my ninja fandom.

No, I’ve come to believe that this is the source: 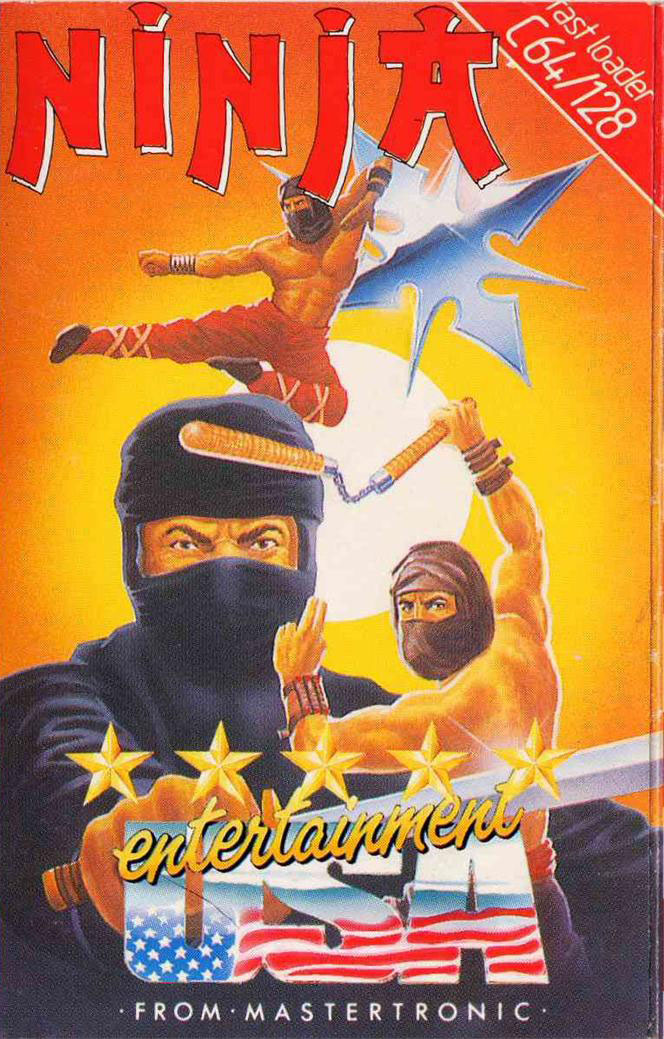 When I was about 5, I befriended a kid a couple years older than me who lived on the opposite side of my block. He was a hyperactive weirdo. The kind of kid that made a big fake cock out of Play-Doh, held it to his crotch and enthusiastically showed it to my mom while giggling. So I never quite clicked with him, but our friendship endured for one core reason: his dad had a Commodore 64 computer with a shitload of illegally copied games on floppy disks. I spent countless hours in their dingy basement watching my friend play games that seemed to blow away what I could play on my Atari 2600 or my dad’s Intellivision. Games like Bruce Lee, The Goonies, Karateka, and, of course, Ninja (not to be confused with the far more popular C64 game, The Last Ninja) .

In my adult life, I was occasionally haunted by vivid memories of that game, but I couldn’t remember what the hell it was called. Turns out it was a pretty obscure low-budget game with an ultra-generic title. I finally found it a couple years ago during an intense late-night Google search. I don’t know what it was that captivated me about that game, but I loved it so much that I remember trying to draw it when I couldn’t watch the real thing. If you’re curious, here’s some dude playing it for a couple minutes, followed by a long stretch of inexplicable blackness.

And here I am dressed as a ninja for Halloween. I have no fucking clue what my brother was supposed to be. 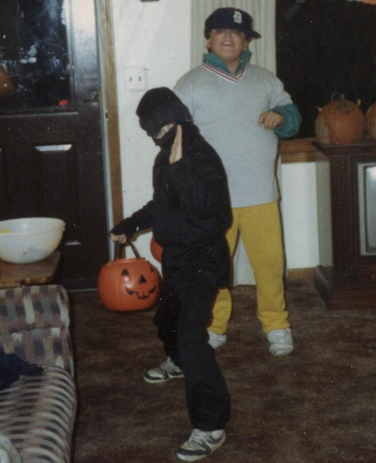 Story time. When I was in second grade, I had a crush on a girl in my class. It started when I bent down to pick up a dropped pencil, and I noticed I could see up her skirt, right to her white panties with little red hearts. I think my pencil had a hard time staying on my desk the rest of the day. In case you ever wondered what a seven-year-old voyeur looked like, here's my second grade school photo: 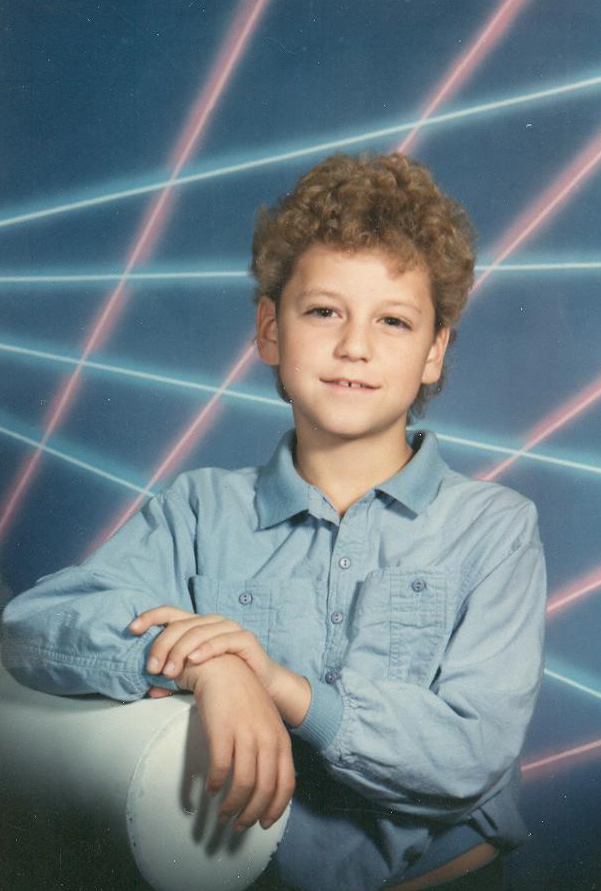 Anyway, so one night, I came up with a flawless plan to win her heart: I’d tell her I was actually trained in Japan as a ninja to serve as a top secret spy. I excitedly lay in bed, coming up with the details of my origin story. I felt certain that once I told her my incredible tale, she would want to be my girlfriend. How could she not?

So the next day at school, I approached this girl during recess and told her I needed to tell her something in secret. She agreed to go behind some bushes with me at the edge of the playground, where I then began my tale. But as soon as I stone-faced spoke the words, “I’m secretly a ninja that was trained in Japan,” her eyes kind of glazed over. I was still talking when she merely turned and walked away, leaving me to trail off in awkwardness, wondering what had gone wrong. We never spoke of that again.

So by the time December of ‘87 rolled along, I already thought ninjas were super rad. But then I came home from school one afternoon to witness the premier of a new cartoon. A cartoon about giant talking mutant anthropomorphic teenage turtle ninjas. Holy fucking shit. That original five-part Teenage Mutant Ninja Turtle miniseries pretty much changed my life. 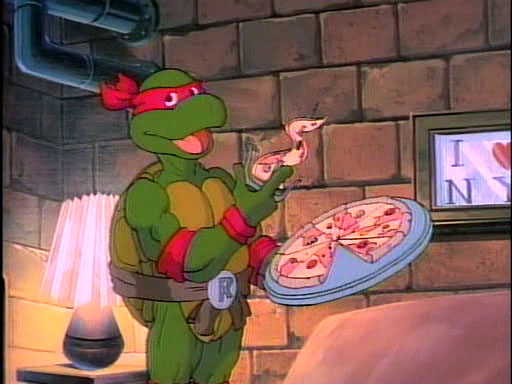 Being a contender for pickiest eater in the world, I had, up until that point, not been a fan of pizza. But the turtles opened my eyes. After all, if pizza was so fucking good that it’s all they would ever eat, then there had to be something to that. Now I’ve consumed more pizza than any human should reasonably be allowed to eat before evolving into Pizza the Hutt.

My love for the turtles also inspired me, for the first time in my life, to pick up a pencil and attempt to write a story—not for a school assignment, but for myself. My story ended up being nothing more than a poorly written synopsis of the original Turtles mini-series. But still, it was a start.

Here's a Halloween costume my mom made me of Michelangelo, apparently after his tragic face-melting incident. 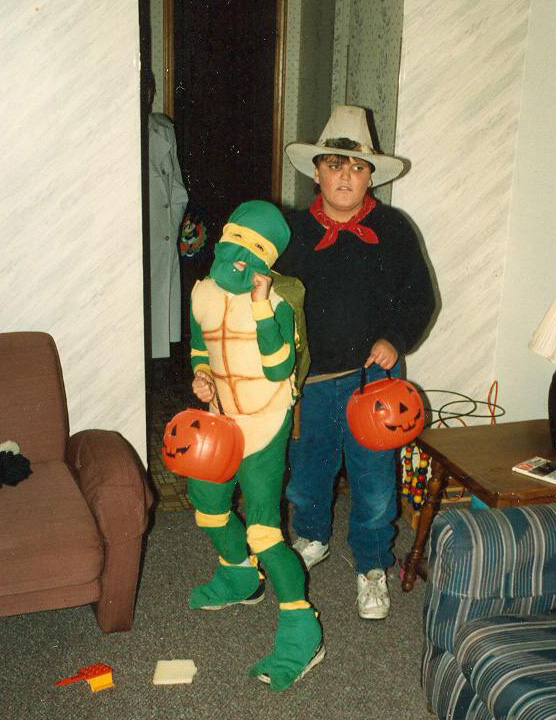 And then there’s Ninja Gaiden. 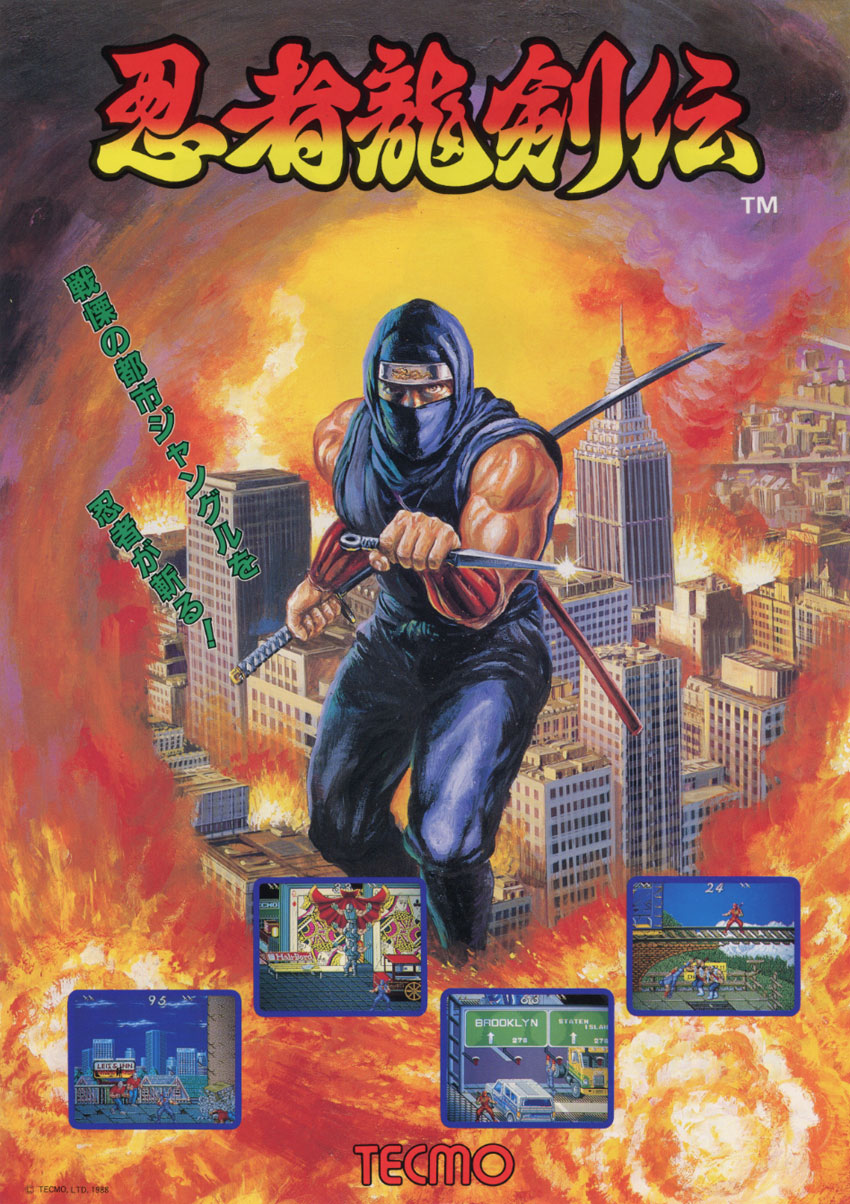 I believe I saw the arcade game first, which is a very different beast from the NES classic. The arcade game was a lot like Double Dragon (which holds a soft spot in my heart for being the first arcade game I ever beat) except your character is an unnamed ninja that fights a bunch of Jason Voorhees-looking street thugs across the USA in order to stop an evil cult led by Nostradamus's buff dual-sword-weilding descendant, ingeniously named Bladedamus. And when you die... Holy fuck. You’re treated to an infamously morbid continue screen where your ninja hero is strapped to a table and ... Actually, if you haven't ever seen it, you should really take a few seconds and watch it:

I believe after the first time I saw the blade reach his chest, painting the screen red, I was too disturbed to play the game again.

The NES version, however, was a game I’d rent whenever I felt like torturing myself with its brutal difficulty. I was never able to get past that lightning wielding, shield bearing, horned-masked motherfucker, Bloody Malth.

I think I actually liked the Secrets of Power official novelization better than the game. Being the big Nintendo nerd that I was, I read most of the Secrets of Power books, but Ninja Gaiden was easily my favorite. It was one of the few Nintendo game novelizations in which the author didn’t use the (admittedly appealing) gimmick of transporting a real-life kid into the game world. Probably because, unlike most NES games at the time, Ninja Gaiden actually had a bit of a story. Cutscenes even. Crazy.

Throughout my teenage years, my fondness for ninjas endured, but in subdued form. For instance, when I played Mortal Kombat, I was almost always Scorpion or Sub-Zero (usually Scorpion since his fatality was easier to pull off). My favorite RPG of the 16-bit era was Final Fantasy VI (then known in the US as Final Fantasy III), and of course my favorite character was the ninja, Shadow. Also, I gained a new appreciation for Batman when The Animated Series informed me that Batman was basically a ninja.

In the year 2000, at the age of 19, I did what any life-long ninja fan would do: I made my own delightfully awful 10-minute “ninja” movie (in which no one even attempts to dress like a ninja).

Like most of my no-budget camcorder movies (I've made over 50 of the things), it was made by my friends and I with minimal forethought and was mostly improvised, with me giving some general directions to the actors and maybe suggesting a line or two of dialogue before recording each scene. It actually turned out to be one of the most watchable movies from the era.

It got even better a few years later when it became the guinea pig for my first computer editing software (up until that point I had edited all my movies “in the camera” as I was shooting them). I added music, sound effects, credits, and to give it a more cheesy foreign martial arts vibe, my friends and I overdubbed the voices (but not of our own characters). You can check it out here:

Sometime around 2005 or so, I decided I was going to remake Bad-ass Ninjas as a full-length movie, heavily based on the plot to my first complete but unproduced movie script, Dark Relic. In Dark Relic, the main character is a nerd who finds an ancient magical glove that, upon wearing it, turns him into the badass greaser-like dude he always wished he could be. But then I realized this concept was too similar to The Mask. So in my script for the full-length remake of Bad-ass Ninjas (tentatively titled, Dark Relic of the Badass Ninja), the main character is an outcast who always wears Hawaiian shirts (because his dead grandma bought them for him), but he soon discovers a magical glove that turns him into a badass ninja.

Of course, the movie was never made. In fact, I never got more than a few pages into the script. Which is a bummer, because those few pages are pretty awesome.

When I met Jessica in 2007, we soon began discussing the idea of re-tooling one of my unmade movie scripts into a comic. Now that I was no-longer constrained by budget, equipment, filming locations, actors, special effects, etc., Jessica and I were free to evolve the story however we wanted. Which we did, through lots of lengthy brainstorming sessions.

Since my scripts were already written to be similar in style to my favorite ‘80s movies, we decided it made sense to set the comic in the 1980s.  And so it slowly evolved into what may possibly be the greatest comic of all time: Satan Ninja 198X.