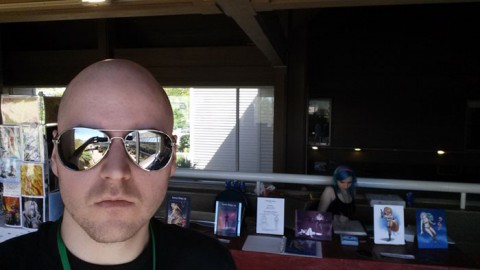 So we’re back from Midoricon in north-west Ohio. We’ve managed to survive “tabling” at our first convention. Barely.

The week leading up to the convention was a complete bummer, since we somehow managed to put off preparations until the last minute. We realized we had a small stack of Satan Ninja comics to sell, but nothing else. So we ended up making a bunch of prints of several of Jessica’s more radical art pieces, which cost us about a million bucks in ink, since the only option we had at the last minute was to print them ourselves. But at least we had some more things to sell.

We left for Midoricon early Friday morning. Since we spent the night doing last-second preparations, Jessica only slept for about a half-hour (and only a few hours the night before), while I didn’t sleep at all. Thankfully, the convention was only three hours away. We arrived about an hour late to the resort hotel where the convention took place, signed in, and set up our table, which was painfully modest and bare compared to pretty much every other artist table at the convention. 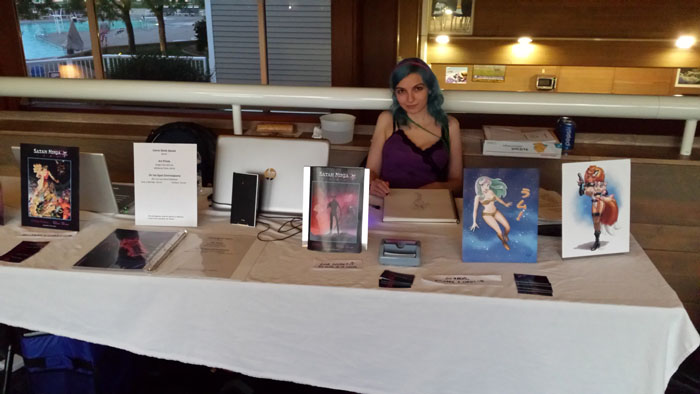 And here’s the table of our neighbors, Eric (Purrfect Designs) and Mack (Kexx Krafts), who actually knew what the fuck they were doing: 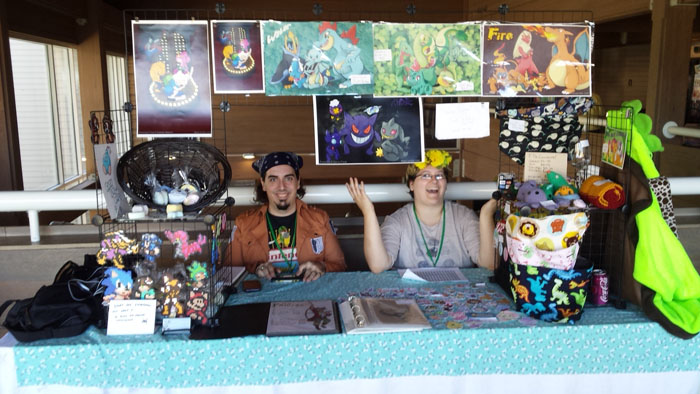 Midoricon is a small convention that’s only been around for three years. Since there weren’t a whole lot of attendees, traffic through the artists alley (the location designated for artists to sell art) was pretty sparse. This wasn’t helped by the fact that the artists alley was split into two locations, at different parts of the hotel.

I spent almost the entire con manning the table, bopping to the beat of 80s music in my chair, alternating between doodling anime babes and chatting with friendly otaku browsing the alley. Most people seemed to skip our table, but with my displayed art being so full of cleavage and Satan, it’s probably fair to say that not everyone’s going to be into our stuff. When people did stop, though, the reactions were always pretty great.

Time and again, someone would almost completely pass the table, then do a double take and come back. Then, with an amused grin, they’d say “Satan Ninja Nineteen-Eighty-Ex??” and enthusiastically check out the art as I explained the comic’s premise.

Our slice of artists alley was in a hallway on the second floor, with a view of the first floor lobby just over my shoulder and a row of big windows directly across from the tables. Through these windows, we had a great view looking over the beautiful grounds of the resort, and a perfect view of the foam weapons battle constantly ensuing outside. Just a bunch of cosplayers whacking each other with foam swords and the like.

The windows were awesome, until sunset. Holy shit, that brutal sunset. Searing into the eyes of me and all my artist neighbors. I think Adam was the only person who brought shades, and he was barely ever at the table. Fortunately, ingenious con-goer Remrie came to our rescue and erected cushions to block the light. Thanks! 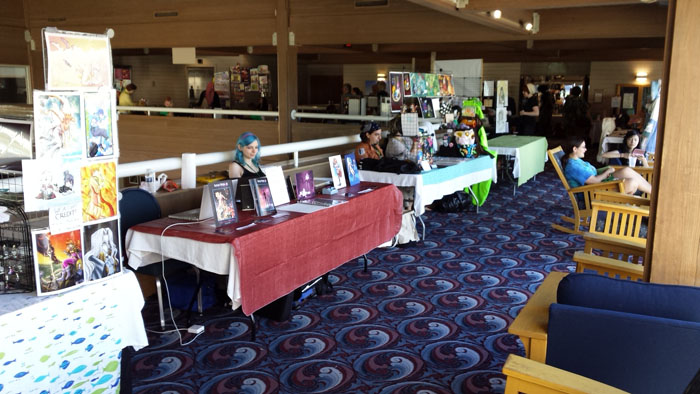 While Jessica tended our table, I mostly wandered the con. I ended up talking to several other artists, who were really friendly and forthcoming with advice. In fact, everyone was incredibly nice, including the Midoricon staff.

What wasn’t nice was the place we stayed at. We thought we’d save some money by staying at a cheap one-star motel that was about twenty minutes from the convention. Just as we were packing up our table Friday night to go to the motel for the first time, a crazy thunderstorm hit. The motel was in the middle of nowhere, so I had to navigate all these unfamiliar back country roads, blinded by the torrential rainfall, and at that point having been awake for nearly thirty hours.

When we finally arrived at the motel, we checked in and drove over to our room. As soon as we got out of our vehicle, lightning struck a light pole that was about thirty or forty feet away from us, freaking us the fuck out.

The room was stuffy and musty, with some sticky surfaces, what appeared to be a blood stain on the wall, a bathroom door that wouldn’t shut (Jessica tried to shut it at one point and ended up trapping herself in the bathroom until I shouldered the door open), an exhaust fan that wouldn’t turn on, towels with little brown stains on them, and a shower knob that came off in my hand when I tried to turn it on. I felt a little like Tom Hanks in The Money Pit.

We were both so exhausted and mush-brained that neither of us set an alarm before we passed out. So we ended up sleeping in Saturday morning and getting to the convention really late, missing half a day of potential sales during the convention’s busiest day. That was easily the biggest mistake we made that weekend.

But instead of letting that totally bum us out, we rolled with it and had fun. 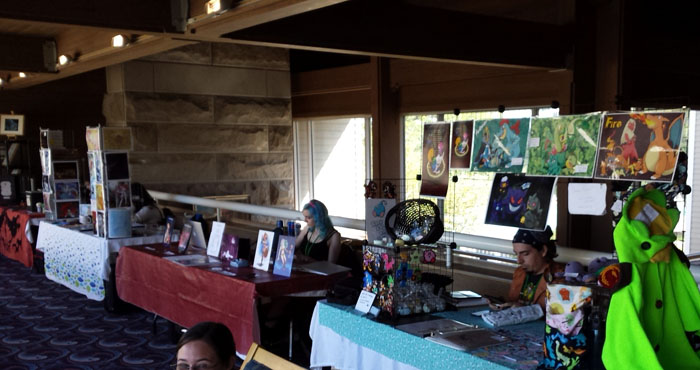 Saturday wasn’t all bad. We made some more sales, and I did an art trade (my first art trade ever, I think) with a cool artist I’d met the day before who’d given me a bunch of convention advice. We sketched each other’s characters, the one she did being a certain Satan Ninja 198X character that I can’t reveal quite yet! I’ll post it in the future. The same goes for another trade I did on Sunday with our artist alley neighbor Mack.

Saturday night, Adam and I decided to check out the rave in the amphitheater. I disappeared for a minute to imbue myself with liquid courage, using a magical dance potion called vodka, and we embarked in the dark. I told Adam about anime convention raves that I’d seen around 2005. Everyone danced like they were playing Dance Dance Revolution, minus the actual dance mat controller. (Not that there’s anything wrong with this, just kind of a funny observation. I’m not some master dancer or anything.) I predicted that this rave would instead have people dancing like they were playing a Kinect dance game minus the Kinect.

We got there and there seemed to be a little bit of the awkward DDR/Kinect dance stuff going on, I guess. I was feeling nice and buzzy, and after sitting on my ass all day, was totally pumped to jump in and dance like an awkward drunken idiot. Adam was stone sober. I motioned toward the dancefloor and told him, “Look, nobody here can dance, there’s nothing to worry about. C’mon, let’s get down there!”

We hopped down to the dance floor from the amphitheater seating, and as soon as our feet hit the ground, just about every single person immediately faced the stage and went into this big synchronized dance routine. I’m guessing it was from a Kinect game, but I could be wrong. In any case, we were left standing there not knowing what to do.

Eventually the dancing returned to normal, I grabbed a discarded glowstick thing from the ground and pranced around like a fool while Adam talked to some people we’d met earlier. There were actually a few impressive breakdancers there, which was pretty cool, and there’s probably video evidence of me being the worst dancer there, holding onto my swinging camera bag in one hand while unintentionally whipping my own thighs with a glowing plastic noodle.

To anyone who's curious to see Jessica drunkenly dance, that’s pretty much all she did in this music video we made for a contest last year (it's hard to tell, but she was extremely drunk during all the scenes of her in the ugly white dress):

Anyway, once Jessica was done making an ass of herself at the rave, we decided to try and attend the “Tea Time with Deadpool” panel. But the panel started late, so we ended up bailing in order to get some sleep before waking up early to ensure we wouldn’t set up late on Sunday.

Unfortunately, with the exception of a couple shots of our table, I totally neglected to take pictures on Friday or Saturday, so most of the pictures here are from Sunday, when the convention was pretty much over. 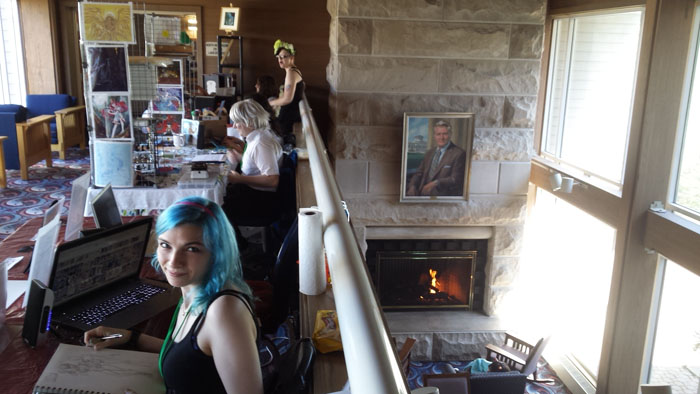 To Jessica's right were our other table neighbors Rae Baade and Kimberly Roby who do Overlord of Ravenfell. They were also generous with their artists alley wisdom. And then there's that dude in the painting who watched over us like a loving father. On Jessica's drawing pad, you can kind of see her in-progress sketch of the Dirty Pair.

So how’d we do overall?

Well, over the course of the weekend, we ended up selling nine issues of the comic, four prints, and two commissions (not counting Jessica's art trades). That doesn’t seem like a lot, but from what I was told, we did really well considering it was a small convention and it was our first time tabling at one. We didn’t make enough to cover our costs, but we introduced our comic to a bunch of new people, learned a fuck-of-a-lot, had fun, and met some cool dudes and dudettes.

So, overall, we’d say it was worth it, and we plan to try more conventions in the future, taking to heart the lessons we learned. 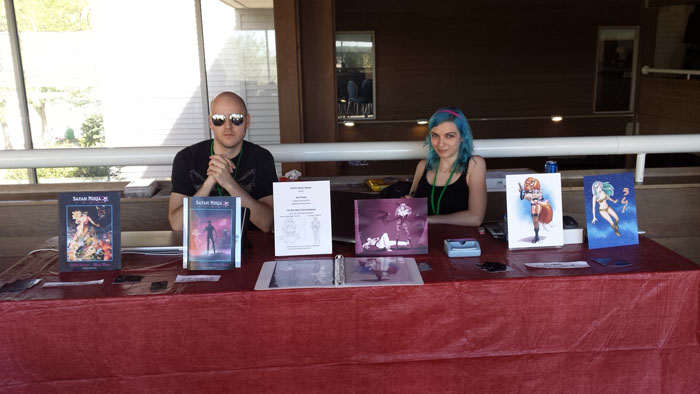