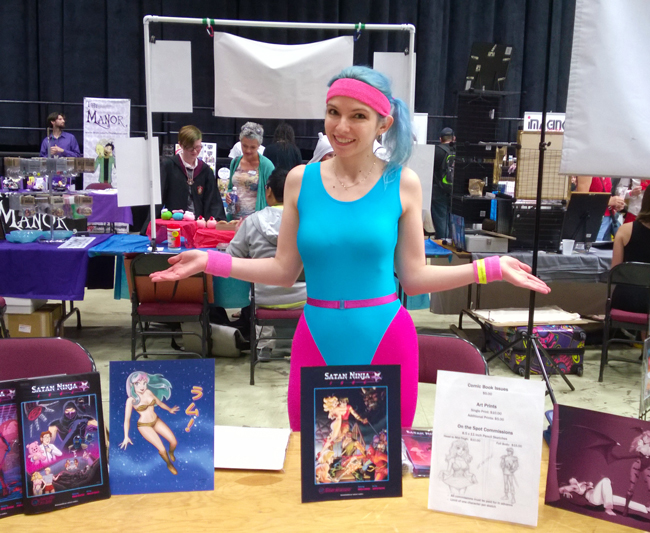 I was supposed to write a blog post this past weekend because Adam had to work several 12+ hour shifts in a row, but then some awesome craziness happened. So lemme tell you about it.

On Saturday, I decided to check out the GRASP (Grand Rapids Alternative Small Press) Comic Expo down the street. I'd first heard about it back in March and was momentarily pretty pumped. It sounded more supportive of indy artists than Grand Rapids Comic Con, which GRASP is sort of a sister event to. Both cons are fairly new.

So of course Satan Ninja would be out of the question. Just as I was starting to feel a glimmer of hope about GRASP, I read their rules:

The GRASP Comic Expo is a family-friendly event and all art displayed and sold must be PG-13 or cleaner. Artists who sell overtly sexual/sensual materials will not be considered for Artist Alley, and artists who bring overtly sexual/sensual materials to sell at the show who happen to get through the application process will be escorted from the property with no refund of their booth fee as this will be considered a breach of contract.

Nooo! Super bummer. I didn't even want to attend at all after seeing that. I've never heard of any other convention having artist alley rules as strict as these two.

The day before GRASP, I found out an artist friend from out of town would be there (Mighty MelleR, whom I met at Midoricon), so I got my buddy Gregg to go with me to take a look at the place after all.

Upon arriving and discovering that there was some badass "R-rated" looking material being sold by a couple artists with no problem, and the artist next to Ms. MelleR never showed, I swooped in and bought the table space for the weekend. The con staff was very friendly and helpful. Luckily I live right by the venue, so Gregg and I were able to grab my stuff right away. I'd also, conveniently, been preparing for Anime Midwest (come see me and Adam there this weekend if you're in the Chicago area!).

When I got home to grab my stuff, the leggings that I needed to complete my 80s workout costume had just arrived in the mail, so I was super ready. My rad mom actually joined us too and helped me out a lot on Saturday. Here I am right after I got back to the con and set everything up: 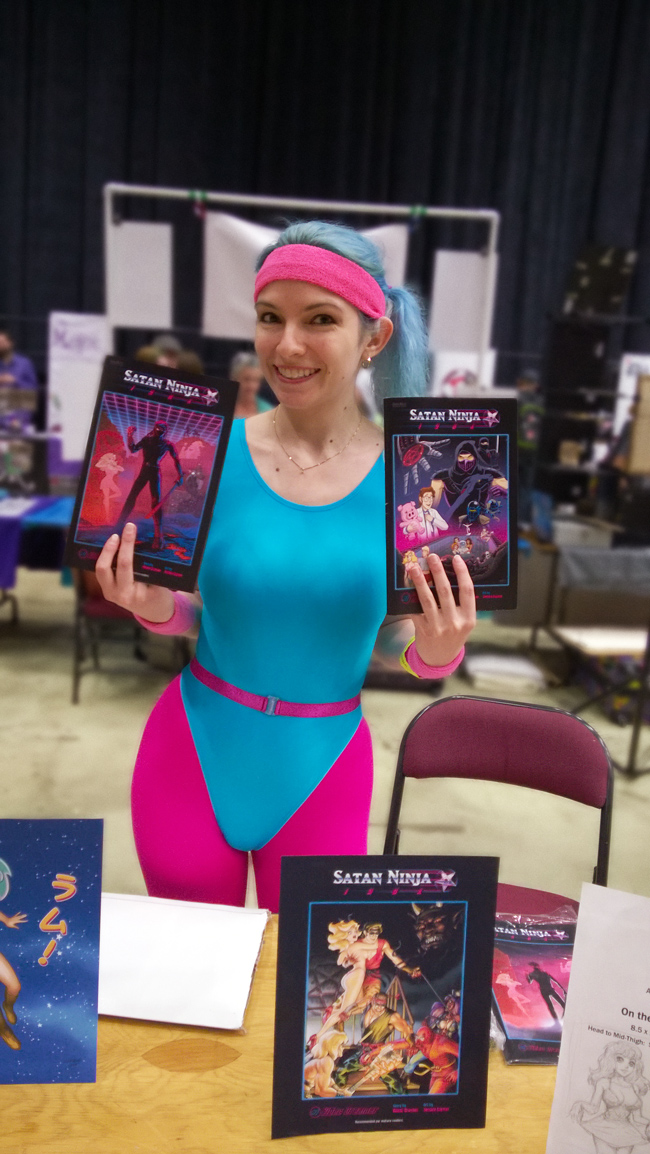 And here I am with Gregg on Sunday. I brought some weights that time so I could pump iron to keep warm. Photo by Joe Hubbard of the MI Geek Scene. You can see more of their GRASP photos from Saturday here and Sunday here. 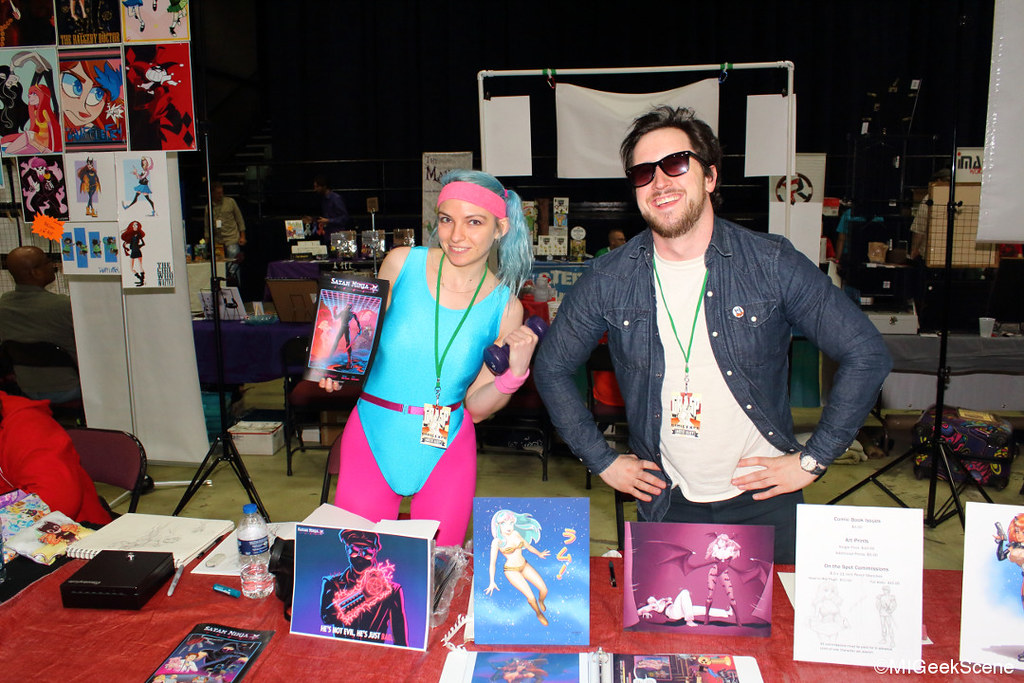 I ended up having a lot of fun. Saw a lot of old acquaintances, made new friends, and made some sales. I'm sad that Adam couldn't make it. Maybe it was for the best, because if he were there, I might have missed being hit on by this awesome robo-dude from Solution Technology Associates, Inc. Here he is with his robed henchman. 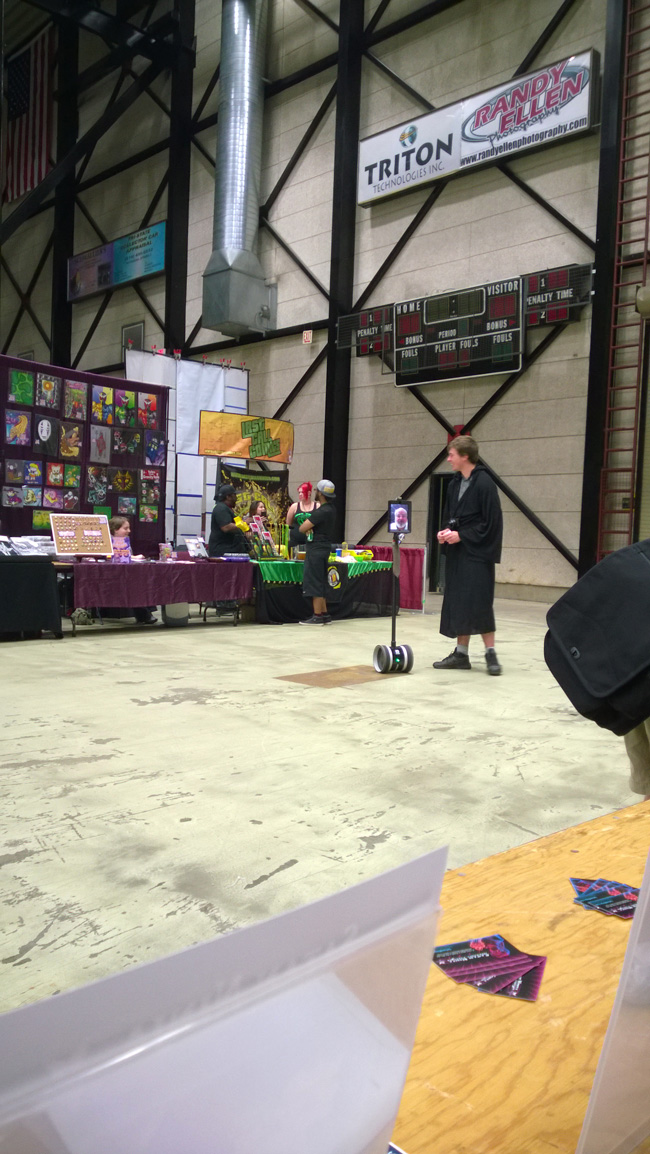 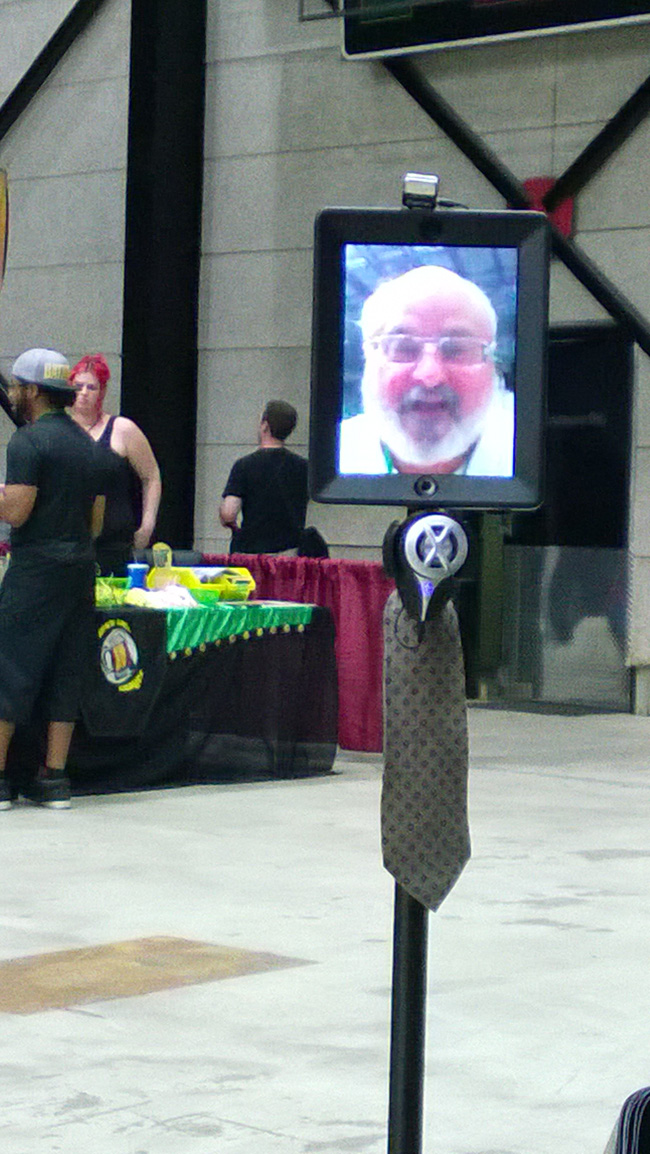 I regret not having taken video, because I can't accurately describe the utter weirdness of seeing this guy adjust his robot body in my direction, then roll up to me to start conversing about millennials' aversion to voting and how he'd like to go on a date with me.

On Sunday, a guy named Wayne Cook commissioned a piece from me for an interesting sketchbook project of his. After Hell is foreclosed, sexy demonesses must resort to menial jobs in the mortal realm. I decided to make mine a security guard. It only seemed appropriate, considering my recent history. 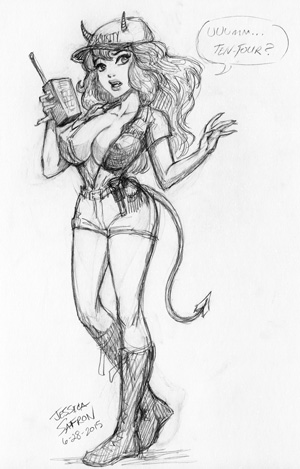 Reactions to Satan Ninja were about as polarized as they were at Midoricon. Quite a few double-takes at the title, followed by blossoming enthusiasm. Quite a few people barely glancing and quickly skipping my table. Gregg later told me that as one interested guy approached and started asking me about the comic, he noticed the guy's friend slowly backing away, wide-eyed, shaking his head.

At another point, a ten-year-old boy came over as his parents talked to our table neighbors. He was extremely tickled and said "SATAN NINJA?? That's like, mashing two completely random words together!! Like Sharknado! Like, like..." and proceeded to come up with his own awesome titles before being hurried away by his parents.

Holy cow, this weekend was packed so full of praise from friends, former teachers, and complete strangers that I felt like my heart could've exploded. My high school art teacher insisted I register a table at GR8BIT Live!, a free gaming convention being held downtown on July 11th, so I did. If you're in the area, come see me there, and check out my teacher's Geek Stuff Garage Sale table while you're at it.

I also got this cool book from a couple other former art teachers, the prolific Comfort Love and Adam Withers: I'm really glad I was able to take part in GRASP. It's so important to me and many other local artists to have an affordable con to table at, and not have to worry about getting kicked out over something like a cartoon nipple (that isn't even necessarily being openly displayed!). There are so many amazing, revered comics that would be considered "R-rated." While GRASP proved to be more supportive in the end, and I'd like to go again next year, I'm still skeptical about GR Comic Con. Hopefully they change their crazy, crazy rules.

Now it's time to hit the sack, then prepare to leave for our first big convention, Anime Midwest in Chicago. Adam and I will let you know how it goes when we get back.