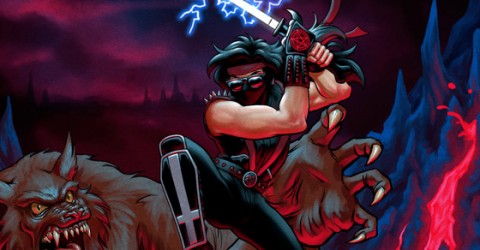 Holy shit, sorry for the extended period of silence. Jessica has been posting updates to her Patreon, but I totally should've been posting occasional updates here as well, because people have begun asking us if the comic is dead.

So for the record: Satan Ninja 198X is totally not dead.

We’ve been actively working on the comic as much as life allows. In fact, this hiatus (which has taken way longer than we anticipated—of course) is finally drawing to a close. Soon. Hard to say for sure when, but probably around the start of Summer. In the meantime, as evidence of the comic's status as "still alive," we've decided to post the Issue 4 cover (if you haven’t already, go on and click the thumbnail image above to give your eyeballs a much-deserved blast of radness).

So what have we been up to these past several months?

Well, for one thing, Jessica and I got engaged, and we’re getting married this August. We’ve been boning for over ten years, so I figured we might as well make our union all government official. I proposed to her through Fallout 2, a game that I worked on a Restoration Mod for (I served as the lead writer and a voice actor). Normally, after you beat Fallout 2 with the Restoration Project, you’re treated to a special encounter in which you can talk to the various people who worked on the mod (all represented by Star Wars characters for some reason). In Jessica’s version of the game, we changed my character’s dialogue so that’d I’d propose to her. Here’s a screenshot: 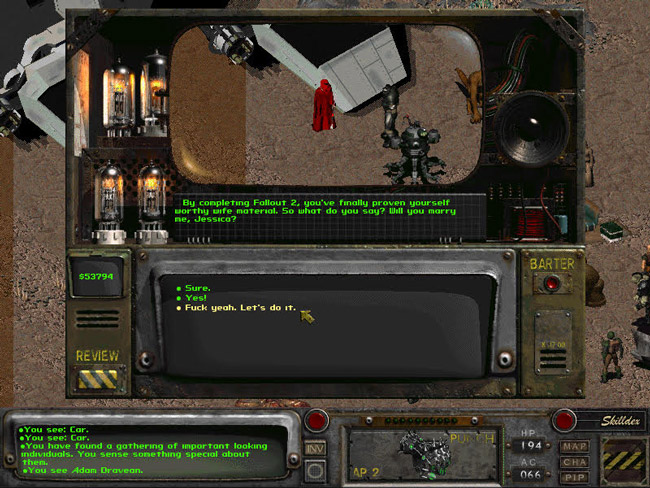 During this haitus, Jessica also went back and did a bunch of art touch-ups on older pages to prepare them for the next run of print issues (the pages on this site haven't been updated yet, but they will be sometime this week). And we’ve been preparing to film a couple more live-action Satan Ninja Promo videos, because why the fuck not? Some awesome props are currently being made for those—it’s going to be rad.

So aside from wedding planning (a huge fucking headache), promo video pre-production, and assorted life stuff, our hiatus has also been prolonged due to some issues with Jessica’s PC, which I’m now going rant about for the next few paragraphs, so feel free to skip ahead if you totally don’t give a shit.

Just as we had purchased an external hard drive to finally backup all our important files (like, for instance,  all of the Satan Ninja art assets), our current hard drive began to die. We managed to backup the data using the built-in Windows 10 backup feature, but the dying hard drive transferred data at a ridiculously slow rate, causing the whole the process to take days.

Then, once the backup was finally done, I noticed that Windows had failed to back up several files, seemingly at random. Fuck. Eventually, I realized that since the Windows file history backup adds a date to the end of the file name, it simply didn’t bother to back up files that were too long to add a date to (strangely, I couldn’t find anyone else complaining about this glaring issue online, so maybe not many people actually use the Windows 10 backup feature, or we’re weirdos who have more abnormally long file names than most people).

Since our backed up data was missing random files here and there, I had to manually go through every folder on the dying drive and compare it to the backup drive, so I could verify what had and hadn’t been backed up, and then manually copy over files that Window’s auto backup had neglected. And since the hard drive was dying it’d often take about thirty seconds to do something simple like open a folder. The whole process was tedious as fuck and excruciating, but I finally finished, and I’m currently almost done transferring all the files back to a new hard drive.

So anyway, the comic’s not dead. We’re not dead. And we’ll be unleashing more of our mega rad comic upon the world soon. At this point, we’re just trying to get a few pages ahead so that once we begin releasing weekly pages, we’ll have a bit of a buffer, making it easier for us to stay on a steady page a week schedule. In the meantime, Jessica will be posting previews of the Issue 4 pages to her Patreon. Also, we’ve finally recorded another episode of our podcast, Radicast 198X, so we’ll be posting that later this week.

Oh yeah, and happy Memorial Day to those of you in the US.

EDIT: Whoa, so I just noticed that during this entire hiatus, the "Last Updated" text on the top-left of the homepage has said that the comic was last updated on January of 2016 (it should've said 2017). Oh man, it's kind of painful to think of how many people visiting this page over the past several months might've seen that and assumed the comic was long-dead. Shit.