As part of our “research” for our comic, we’ve been watching a whole fuck-ton of 80s movies, both to refresh ourselves on the classics and to hopefully uncover some more forgotten gems, like the 1986 horror film Trick or Treat. Since we’re watching these movies, I figured I might as well review some of them.

It felt appropriate to kick off our movie reviews with the film that, as far my Internet sleuthing can uncover, is the first American-made 80s movie about ninjas. It also has Chuck Norris. And, best of all, the thoughts of Chuck Norris.

I’m speaking of the 1980 action film, The Octagon. 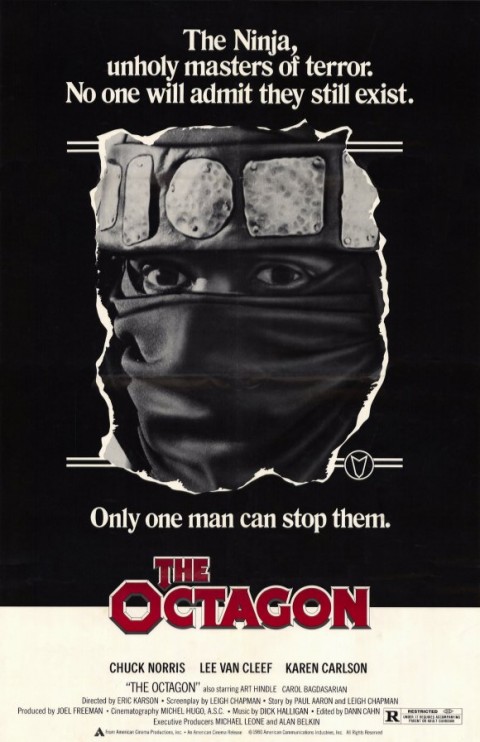 Not only does The Octagon seem to be the first western-made 80s movie about ninjas, it’s also one of the first western-made movies to prominently feature ninjas, ever. It seems to only be preceded by the 1967 Bond film You Only Live Twice, which features a squad of Japanese gun-toting commandos that dress similarly to ninjas, but I don’t think they’re ever referred to as such in the movie (it also features Sean Connery’s Bond being turned into a super unconvincing Japanese man through the use of makeup and fake eyebrows).

The Octagon was the third starring role for Chuck Norris, preceded by the stupidly named Breaker! Breaker! (1977) and the more awesomely named Good Guys Wear Black (1978). I’m not gonna go into detail about the plot (you can read the Wikipedia article for that) but basically, there’s a secret camp in a Central American desert where an Asian bad guy is training mercenaries to become ninja terrorists. Turns out this Asian bad guy is Chuck Norris’ half-brother and sworn enemy for life. Why? Because when they were younger, Chuck beat him in an obstacle course race. Asian bro acted like a dick about it, so their dad cast him out of the family. So now we’ve got ninja terrorists and it’s up to Chuck to stop them.

Most of the movie involves Chuck getting involved with a revolving door of damsels that serve to draw him into the plot (seriously, this movie switches up who the apparent female lead is three times). Once in a while he meets up with Lee Van Cleef for some exposition. Occasionally he fights some ninjas. But the real star feature of the movie is Chuck’s creepy whispery thoughts, which are projected to the viewer via voice-over. It’s awesome. Check out this compilation video I put together featuring all these incredible voice-over parts:

The movie doesn’t really kick in until the final act, when Chuck decides to infiltrate the secret desert training ground after the ninjas capture his best friend (played by Art Hindle, who starred in The Brood and looks a lot to me like Peter Dinklage post-super mushroom consumption). Here, we get to see Chuck karate a shitload of ninjas, and even take on the ninja boss character, Kyo, in the titular “octagon.” I was a little surprised that despite naming the movie after it, no deal is ever made about this octagon. No one ever references it, and it just serves as the set piece for part of the climax. I really expected it to get name dropped at some point, like the Asian Bad Guy could say something stupid like, “Welcome to your death, Chuck Norris… in the OCTAGON!” Plus, the theatrical release poster (pictured above) makes it seem like "The Octagon" is the title of the "one man" who can stop the ninja—the "unholy masters of terror."

Ninja Factor: It introduced the 80s to ninjas, so of course it ranks high on the ninja factor (although the 1981 film, Enter the Ninja, usually gets the credit for truly kick-starting the 80s ninja craze). There's ninja action sprinkled throughout most of the movie, and then a full-on ninja extravaganza at the end. It also features the bad-ass mute ninja enforcer, Kyo, who gets a special ninja outfit and hisses like a snake during combat. But if you watch this hoping to see Chuck as a ninja, you’re going to be disappointed. Although he does wear all black in the final act, he never dons any sort of ninja mask.

Boob Factor: The third female lead briefly shows some pretty nice side-boob. There’s also a scene of a shirtless, sweaty, and hairy Chuck Norris practicing, if you’re into that.

80s Factor: As far as the 80s factor goes, this ranks pretty low. Like most movies released in 1980, The Octagon was likely filmed in '79, and thus feels more like a 70s movie.

Voice-Over Factor: This movie goes above and beyond in this regard. All your voice-over needs will be met, and then some.

Overall Rating: We give it two-and-a-half pentastars out of five.