Some Updates to Old Comic Pages

We've always felt that Satan Ninja 198X should be considered a work in progress until we actually finish it and collect it into physical graphic novel form. So over the course of the past few weeks, we've once again gone back and made some updates to Issue 1 and 2, mostly in preparation for our next print run of those issues.

We didn't make too many changes, and most of the updates to the art are so minor you probably won't even notice them. For instance, a couple background extras at the pool party scene were given slightly more '80s looking hair. Stuff like that.

There be boobs ahead, so don't venture on if you're at work or hangin' with grams or whatever.

Here are the biggest changes Jessica made:

This is actually the second face-change this image of Veronica has had. We'd never been satisfied with the way her face looked in this panel, which was a bummer since this was her debut in the comic, and this was otherwise one of our favorite pages. So we thought it was important to get right. Jessica also took the opportunity to alter Veronica's tits, shoulders, arms, and skin tone (for some reason, Veronica was a little yellower here than she is anywhere else in the comic).

The next change I didn't bother making an animated GIF of, since the change is so drastic. 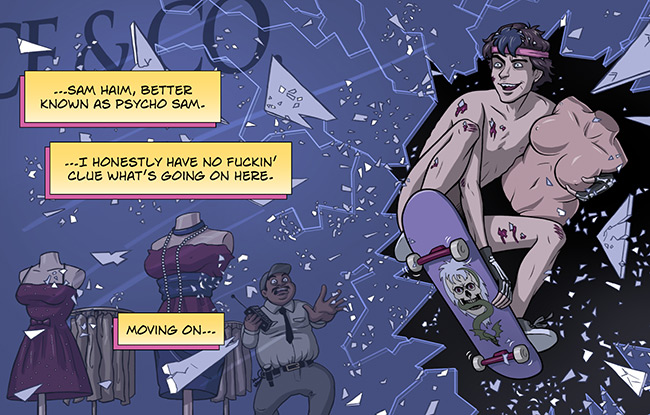 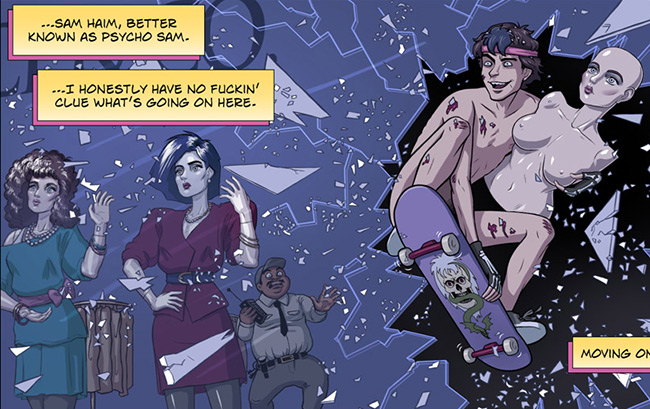 "I remember seeing a brief part of Mannequin Two (1991) when I was channel surfing sometime around the late nineties. The secretly-alive-mannequin in the movie was going through a crisis due to all the realistic mannequins in the store being replaced by scary "modern" featureless mannequins, which apparently reflected an actual new trend in the nineties. This always kind of nagged at me, so I determined that these mannequins needed to be eightiesed the fuck up. It was also an excuse for me to inject some much needed Patrick Nagel aesthetics into the comic."

And here's the big change she made to Issue 2:

Darwick originally had gigantic eyes, but each subsequent time Jessica's drawn her, her eyes got smaller and smaller so that she'd fall more in line with the '80s creatures/cartoons that inspired her (Carebears, Ewoks, Mogwai, Rainbow Brite, etc.). So Jessica finally went back and updated her original appearance. Holy shit do her original eyes seem freakishly big to me now.

The only major text change we made is on Issue 1, page 6. We'd noticed while looking at Google Analytics that new readers would often drop off on that page. So we took a gander at it and realized that there was a shitload of text that was likely causing casual viewers to say, "Eh, fuck it," and go back to browsing Reddit or Facebook or whatever. So we trimmed down the amount of dialogue in page 6 (and 7) and made a few changes. Some of the balloons got moved around, so Jessica drew in a couple more arcade cabinets to fill the empty space.

Another change you'll notice is that we now have a banner linking to Jessica's Patreon at the bottom of the comic pages. We know some people just come to this site to read the latest page and don't ever click around the navigation menu or read these blog posts, so we figured adding that banner would be a good way to make them more aware of the Patreon. After all, drawing this comic has become Jessica's full-time job, but if she doesn’t make enough through Patreon, it might not be able to stay that way.