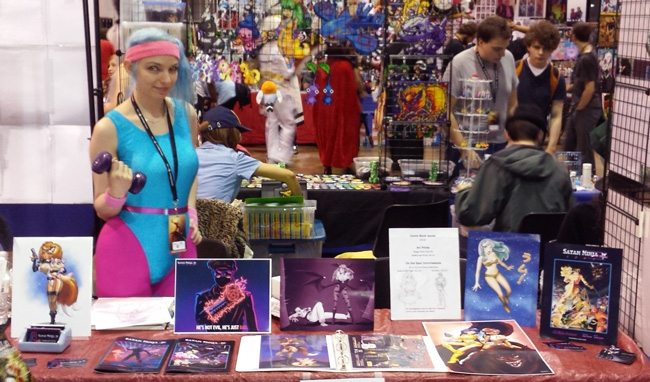 We didn’t watch fireworks this past weekend. Instead, we spent the evening of the Fourth of July listening to Albert Wesker of Resident Evil tell us about the various characters he’s given boner injections to.

So yeah, we’ve returned from the Chicago area, where we tabled at Anime Midwest, our second anime convention (you can read about our first experience here). This was a much larger convention than any other we’ve tabled at, so it’s not too surprising that we sold a lot more stuff. We even got sort of close to recouping the cost of the table/hotel/parking/gas.

Most people passed by our table without much more than a glance, because once again our table was by far the most modest looking table at the convention. The other tables were like sexy neon-lit Las Vegas billboards, and compared to them, we were like a crinkled photocopied flyer posted to a telephone pole.

However, those who did stop to check us out usually received us really well. I had wondered if Jessica’s art would appeal to more dudes than dudettes, what with her habit of drawing busty babes and such, but those interested in her stuff actually seemed to be a pretty even mix, so that was cool to see. Of course, we got the most enthusiastic reactions from people who really dig the ‘80s. And although a couple people asked us if we'd seen Kung Fury, no one accused us of ripping it off, so that was a nice.

Our prints didn’t sell too well, we’d guess because fan art prints (AKA art prints featuring characters from licensed properties, like Dragonball, Spider-Man, or Mario) sell the best, and we don’t have many fan art prints. What little fan art we do have tends to be of things from the ‘80s, like Lum and the Dirty Pair, which most modern anime fans aren’t very familiar with. And of course Satan Ninja prints don’t tend to sell well because no one knows what the fuck Satan Ninja is. But a lot of people loved Jessica’s art style, so she became overwhelmed with on-the-spot commissions (basically, people paying her to sketch characters for them while she’s at the con). So that was pretty rad. She actually overbooked herself a little and had to do a few at home. She'll be mailing these ladies out tomorrow, along with some others: 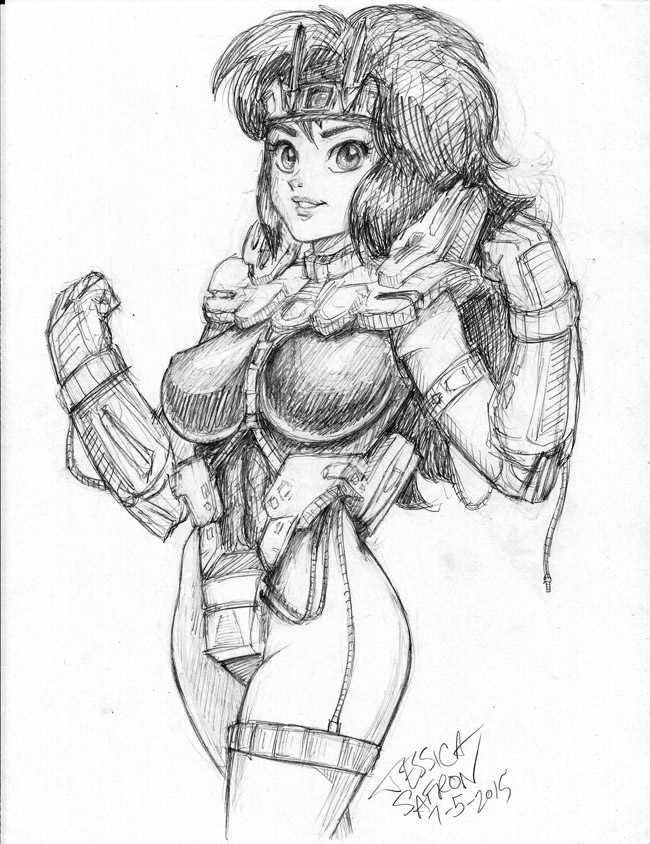 We also sold quite a few comics. We hadn’t ordered too many before the convention, because we had to pay for rush printing and delivery and we weren’t sure how well it would sell. But we ended up selling out of every copy of the revamped Issue 1 (with the non-Double Dudes cover) and Issue 2.

Jessica spent most of the weekend tethered to our table, while I wandered the convention, taking in the spectacle of it all. I hardly took any pictures, unfortunately, because we forgot to bring our camera, so I had to use Jessica's cell phone. But she needed her cell phone to stay with her most of the time so she could take credit card payments, look up reference pictures, and text people to let them know when their commissions were done. And of the few pictures I did take, most of them ended up too blurry. But here's a distant shot of Jessica in her '80s exercise getup, talking to some prospective buyers: 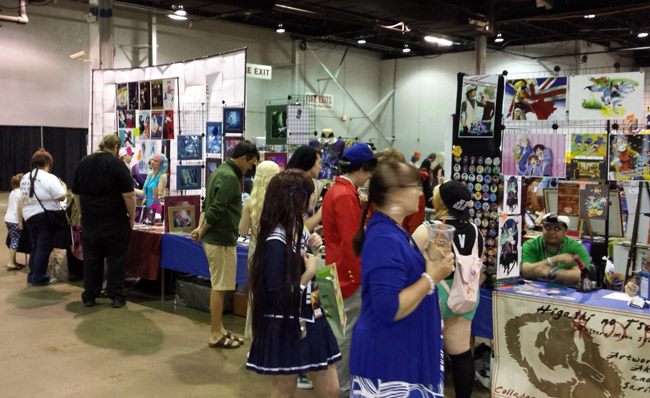 I met some rad people, and got a lot of great advice from other artists. Something I noticed is that every person I talked to was either incredibly personable and easy to talk to, or they were really awkward and nearly impossible to hold a conversation with. There didn’t seem to be much of a middle ground, but fortunately, most people I spoke to were of the personable sort. In particular, the artists Sarah Madura, Alexis Royce, and Ogawa Burukku were incredibly helpful and great sports about letting me pick their brains about tabling at conventions. And most helpful of all were our friends Mighty MelleR and her husband, who we met last year at Midoricon, and have done so much for us, including helping us get a table at Anime Midwest in the first place.

Since Jessica was so busy drawing commissions, we didn’t have much time to check out the convention’s panels, even after the vendor room closed for the night. However, we did catch what instantly became my favorite panel I’ve ever attended. It was D. C. Douglas, the voice actor for Resident Evil’s Albert Wesker, reading erotic Wesker fan fiction along with selected members of the audience. Hearing one of my favorite characters vividly describe fucking other Resident Evil cast members (both female and male) in ridiculous situations had Jessica and I laughing so fucking hard. We loved it. Definitely the highlight of the weekend, and we highly recommend checking out that panel if you ever get the chance.

And now just to break up this wall of text, here's a picture (which I didn't take but stole off of Detached Fantasy's Tumblr) of one of my favorite cosplayers at the event, Pyramid Head from Silent Hill 2: 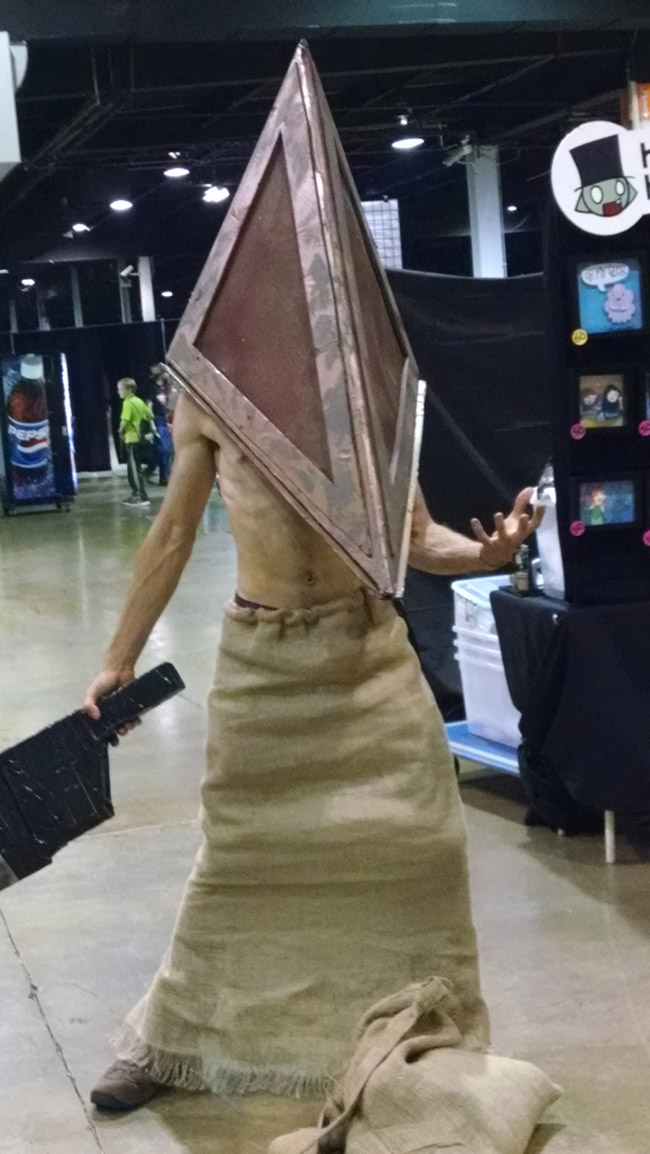 And you bet your ass Pyramid Head bought a Satan Ninja comic from us.

Overall, it was a really good experience and so we definitely plan to table at more conventions. We feel confident that if we get our table presentation up to snuff, and have a greater variety in the stuff we sell (but it’ll always be stuff we’re into—we’ll never do unsolicited fan art for something just because it’s the hot new thing), then we can actually start to turn a profit at these things. All while introducing people to the total radness that is Satan Ninja 198X.

And if you’re reading this and you’re someone who bought something from our table, or even just took a business card and decided to check out our website, then you totally fucking rule. ::cyber high five:: Our comic is still in its infancy, but it’s definitely going to grow into something mega-fucking-rad. So someday you’ll be able to feel ultra cool by telling everyone you were into it before it got popular.

By the way, our hiatus is nearing its end. Issue 3 is lurking in the shadows, just waiting to flip out and stab its way into your heart.

Edit: If you're bummed about our lack of pictures, you can go check out a whole bunch of Anime Midwest pictures that have been tagged on Tumblr. I'm probably lurking around in the background somewhere in at least a dozen of 'em.